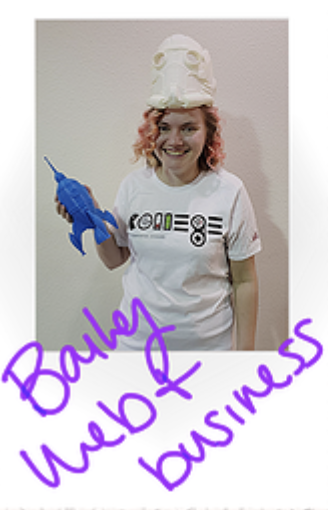 Student-led multimedia production company at UAT brings together innovation, creativity and a group of nerds. BunchOfNerds (BON) was created as a club for students to create projects and network.

V Greffin, game design major and CEO of BunchOfNerds, started the club with the desire to create friendships with artists and programmers and to collaborate on small projects. The club soon morphed into a large team concentrating on one big project at a time. Executive team V, Bailey Neilson, Ricardo Martinez, Sabrina Peterson and Abby Palmer soon turned the club into a company.

During a phone call between V and their mom, V’s mom said, “you’ll figure out something, you’re all just a bunch of nerds.” The name stuck and the company grew from there. Company culture at BON is focused on having fun. In the future, the executive team hopes for the company to be self-sustaining, so that the creators can focus on creating.

Originally the company was just focused on game design, then a friend asked V, “what if I don’t want to work on video games, can I still join BunchOfNerds?” It was agreed to expand the company to a multi-media production studio after that. BON produces any form of entertainment media the members are interested in creating—the possibilities are endless.

One of the more difficult aspects the executives faced was the steep learning curve required when creating a company. Many hours were poured into research, trial and error, sales, LLC licensure, trademarking, trade naming, etc. On top of the legal aspects, getting the word out about BON proved to be another challenge.

Not only is BunchOfNerds on social media (Facebook, Twitter and Instagram), but they’re also friendly faces at the Founder’s Hall yard sale. They spread the word by talking to everyone that comes their way and selling branded sunglasses. “In general, we all wear our BunchOfNerds merchandise,” says Bailey, “that way it’s just there and people ask about it.”

During the process, UAT faculty and staff, such as Scott Beemer, Matthew Marquit, Dapzury Valenzuela and Derric Clark, have been more than willing to give pointers and business advice.

Baily, the company accountant, distinguishes classes such as entrepreneurship to marketship, project management and accounting as classes that have helped her develop much of what BON is accomplishing. On the creative side, Ricardo and V thank their game design courses, which taught scrum and agile learning. These universal skills help the executive team lead the company, monitor progress and stay accountable with release schedules.

BON holds weekly meetings every Saturday at noon. Here, team leads give updates on projects in the works and any issues that arise. “I’m frequently messaging people, like hey we’re looking to post something on social media, do you have any screenshots?” says V, “We’re constantly getting updates. When I get bored, I’ll go through our drive, through all the sig files, and see what’s new and what’s been added and read over documentation.”

With an active team of 17, BON is currently running five projects. “We’re also using Pack and Plan as a development stage, so that we know what’s in process, what’s finished and we go over it,” notes Ricardo, “If it still needs to be done, we can bring it back to in process, otherwise, it needs something else finished and we move on from there.”

The executive team joined BON for different reasons. For Baily, she was inspired by her business owning mother, “I love the opportunities that she’s had as a business owner and I want that for myself. I love the culture that UAT has. Plus, this BunchOfNerds was such a cool club in my eyes,” states Bailey, “Once V had proposed making it a business, I knew I wanted to be a part of it.”

Ricardo has always wanted create games that give others the same entertainment he enjoyed from games when he was younger, which has led him down the game design path. Similarly, V enjoys making and creating things.

UAT for Gamers: Create Your Own Gaming Universe

Why Get A Game Design Degree? If you often find yourself daydreaming about fantasy worlds, diving into the digital depths of mystical lands, or engineering complex landscapes in your favorite games, ...