On Monday, October 3, 2022, students, staff and faculty welcomed Director of the Arizona Department of Homeland Security, Tim Roemer, to University of Advancing Technology (UAT). Director Roemer was as energetic as he was insightful during his campus visit. Starting off the day, cyber students were invited to an intimate lunch where they could ask Director Roemer questions, gain insight from his experience and hear some funny stories that reminded everyone it's okay to not know everything about every thing.

Network Security and Network Engineering student, Tyler Prettyman, shares his experience from the day. "Getting to meet Director Tim Roemer is something I am very thankful for. I feel very lucky as a student to get insight about the industry from such a high ranking government official. Not only was Director Roemer very knowledgeable, he was very friendly and fun to talk with."

Prettyman continues, "One of the takeaways from my conversations with the director was that connections are everything. Networking with good people can lead to great opportunities. Another topic that he talked about was how to bring cybersecurity to the general audience—it was very interesting on how he did it with his own team. I feel as some of his insights and recommendations will stick with me for awhile."

After the lunch, Director Roemer presented to all students, faculty, staff and the community about the 5 C's of Cybersecurity, different from the 5 C's of Arizona, which he tested everyone on (we passed!). Roemer added, "I always say cybersecurity is the sixth C of Arizona." Before getting into the five C's, he shared what it was like when he was starting out. He was first exposed to how important cybersecurity was back in 2012 when nation-states were attacking the US financial sector—they were targeting banks, attempting to shut them down. "Cybersecurity was growing in its demand of policy makers to pay attention to it, but not a lot of people had a lot of experience in it," explained Director Roemer.

Director Roemer was great at being transparent and sharing with the students the reality of getting started in, not just cybersecurity, but any field. "From day one it was like drinking out of a fire hose. Figuring out working with experts, how for me to be a generalist, and to bring it to a level that I really understood the nuances of cybersecurity," he continued, "and how the state was going to move ourselves forward." As he explained the progression of his role, his experience also touched on the first C of Cybersecurity. Director Roemer discussed culture, "The first thing I knew we had to do was create a culture of cybersecurity awareness. We mandated annual cybersecurity trainings for all 36,000 state of Arizona employees immediately." 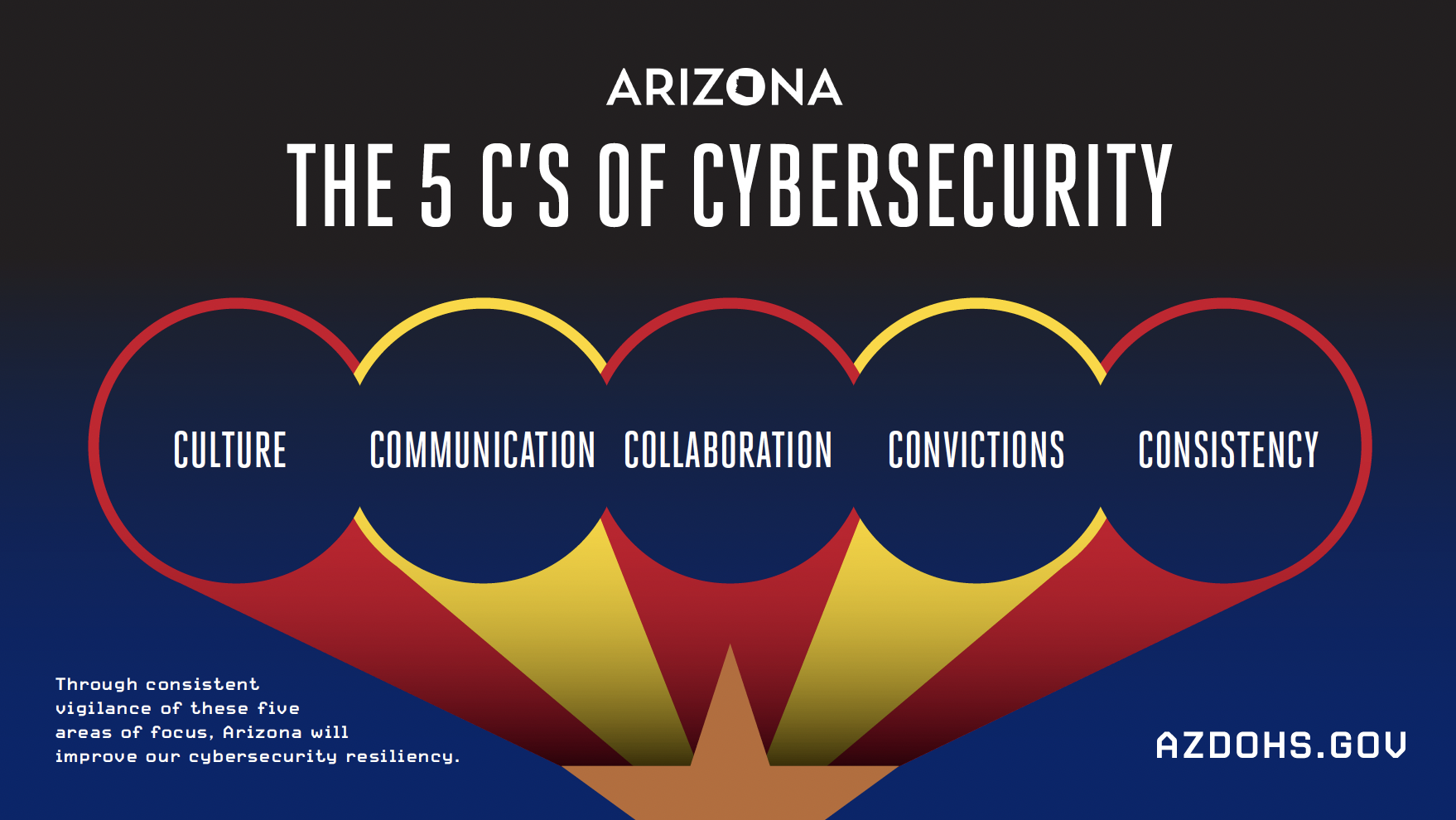 He described the different groups who are the biggest threats to cybersecurity: nation-states, criminals and hacktivists. People asked him what keeps him up most at night, and he replied, "Probably the criminals. When people are actually stealing your data, now you've got a huge problem, and the criminal networks have proved that's where they want to go. Cybersecurity knows no borders." Moving right into the fourth C of Cybersecurity, Director Roemer discussed convictions. "Actually making cybersecurity incidents into a prosecutorial issue. These events are crimes and someone needs to be held responsible." He continues, "This is not a victimless crime. You cannot get away with this anymore. We have to prosecute the cyber criminals that are out there. We need to build cases with law enforcement, and make examples out of them."

The fifth C is consistency, which Director Roemer mentions is short and sweet but necessary. "You can do all those things [the four other C's of cybersecurity], but you can't do them once. You have to do them all day, every day, 24/7, 365." After wrapping up the 5 C's, there was a question and answer portion where Director Roemer went into more detail about his time working with the White House, his thoughts on current events and what the best advice for students is. He stressed the importance of networking in the cybersecurity field for current and future students. Ending the educational day, with a campus tour, starting with UAT's Security Operations Center (SOC), where Director Roemer said he's "been incredibly impressed."

Sam Roethemeyer, a Network Security student, reflects on the day. "It was really insightful to hear from not only a professional in the industry but from the director of the Arizona State Department of Homeland Security. As someone who currently has an internship with the Arizona Department of Economic Security, specifically with the Security, Risk, and Compliance team, it was reassuring to hear from him about some of the difficulties they have had because they match up with some of the difficulties my team has had. I also went to the lunch with him, so we were able to get a little more personal. We picked his mind for a bit, and he gave us some tips on career business in cybersecurity. When you think about someone in his position, you would think they would be a lot more intimidating, but he was down to earth, friendly and very approachable. He told us his path through his career, and it is amazing at how time and opportunities lined up so well for him to end up in the position he is in now."

Earn a Degree In Cyber Security at UAT

UAT offers a Master’s of Science in Cyber Security, as well as bachelor’s degrees in Network Engineering, Network Security, and Technology Forensics. Our Cyber Security Degree for Ethical Hackers and Network Security Curriculum has been certified through the NSA/DHS National Information Assurance Training Program in Information Assurance and Cyber Defense.

Designated as a Center of Academic Excellence by the National Centers of Information Assurance Education (CAE/IAE), UAT’s Network Security Bachelor’s of Science degree prepares students to take on the ever-evolving world of information security.

Forgot Password? A password manager is a tool that is designed to manage many passwords in a secure and easy to access manner. Using a single password for all your accounts increases the likelihood ...