Five UAT Game Studios students worked on a project called, “The Wall: Unknown Stories, Unintended Consequences,” under the leadership of USA TODAY NETWORK and The Arizona Republic. After 15 weeks of research and development, "The Wall," launched on Sept. 20.

"The Wall" is a in-depth project that provides a visual representation of President Donald Trump’s mission to build a wall on the U.S.-Mexico border.

Initially, UAT's dev team conducted a great deal of research on the LiDAR terrain data of the regions. Then development began in Unity to create and then export the data into an interactive map for the HTC Vive.

UAT students were responsible for were writing code for the VR worlds, programming in sound and video, designing the navigation, creating player functionality, and asset creation. 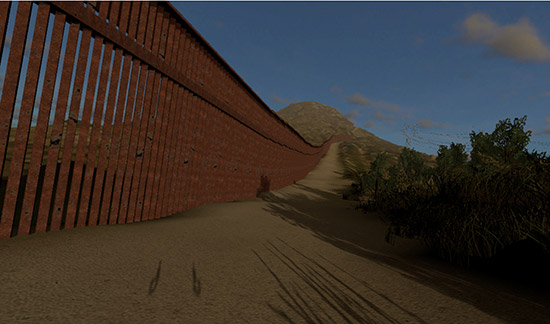 A visual representation of The Wall in VR

Throughout the project, students remained unbiased and considered the experience from both perspectives - that of a Border Protection Officer and of the humans crossing the border. It was important to consider what the terrain would look like if the wall were to be built through a river, a mountain range and through residential areas. It was the students task to put this data in to a visual component to support a series of stories transcribed by USA Today reporters.

For more information, visit The Wall.