Garrett Reuscher gets a kick out of surprising dental hygienists when he refers to his teeth by their number. Garrett has picked up a lot of medical terminology since he started working as an educational applications developer at a Western University of Health Sciences university, where he develops games and simulations to train medical students.

Garrett primarily works with Unity, a tool he learned while earning two bachelor’s degrees in game programming and advancing computer science at the University of Advancing Technology. He works with a team to make apps and games for a variety of platforms, including WebGL, mobile phones, the HTC Vive, the AR platform Vuforia and the Microsoft HoloLens. He also gets to experiment with exiting emerging technologies such as haptic gloves and 3D printers. 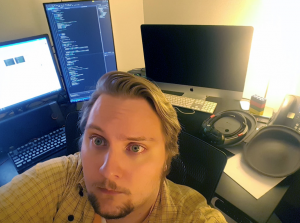 “No matter what project I’m working on, I always learn new technical skills and new tidbits of medical knowledge,” Garrett said. While working on his most recent eye simulator project, Garrett learned that the eye has six different muscles. The project, a browser application that emulates the muscles and nerves that control the human eye, helps students understand how each muscle affects eye movement.

What’s next for Garrett? He is hoping for a virtual reality project: “Either a program for identifying surgical tools or an app to view Digital Imaging and Communications in Medicine (DICOM) files in VR.” He also makes time for his passion projects, including a Pokémon fan game and strategy board game. 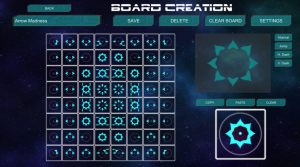 Garrett gained a lot of technical and programming skills during his time at UAT, and he learned a lot about teamwork and SCRUM in his game production studio classes. “Having courses that are structured like real-world work environments is the next best thing to an internship,” Garrett said. But he also appreciated the general education classes. “I’ve had a much easier time with public speaking and presentations after all of the professional development courses and workshops available at UAT.”

Garrett’s advice for current students? “Push yourself to do extra. Don’t stagnate. And make connections.” He remembers professors and staff members encouraging him to network while he was in school. He was hesitant at first, but then realized it works.

“Within the first six months at my job, I recommended one of my fellow UAT grads to come work with me. Had we never met, he might still be job searching.”

Do you want to learn how to make mobile apps and games that shape the future of education like Garrett? You can learn more about our Game Programming degree program here.