Let Someone Else Pay for College

Now, it’s not so expensive that it’s impossible to pay for, but it can present certain financial challenges that will make the faint of heart, well…faint.

But it doesn’t have to. The big published price tag of college is offset in a number of ways. One of the easiest of those ways is by getting someone else to pay for it.

Seriously, let someone else pay for it. No, not your parents. (Unless they just want to, of course.) Let someone pay for it who has deep pockets. Like Scrooge McDuck deep.

You Won’t Know Unless You Ask

Okay, chances are your boss can’t make it rain like Mr. McDuck, but chances are he (and you) may work for one of the thousands of companies that can.

Most companies (as many as 92% according to one survey) offer this wonderful little perk called tuition reimbursement. It’s like free coffee or paid paternity leave or nap rooms. Yeah, nap rooms. That’s a thing now.

Wait. Why would a company pay me to go to college?

That’s a great question. Thanks for asking.

There are actually several great reasons why companies offer tuition reimbursement and why you shouldn’t feel bad taking them up on it.

Let’s take a look at the two primary options.

Numero Uno: The more education you have, the better you will be at your job.

I mean, this is a no-brainer (pun!). The more education you have, especially—but not necessarily—related to your current job, the better you will be at your job.

For instance, let’s say you work as a fry cook at McDonald’s and you’ve decided to take advantage of their Arches to Opportunity program. Yeah, your future career path may not be headed towards the level that a degree in Cyber Security from UAT would take you, but you’ll still be earning an education that will likely lead to a promotion and an increase in pay. Regardless, you will gain new skills that will apply to the position you currently fill and eventually hopefully enable you to advance a level or two above where you are now or find new opportunities elsewhere.

The companies that offer these types of tuition reimbursement benefits know what a lot of people fail to realize–-no one wants to work as a fry cook their whole life.

And these companies don’t want a person to work as a fry cook their whole life. They see you working hard as a fry cook and when your annual review comes up, your boss says, “So, how are things going? Do you like your job?” That’s when you mention you’re interested in advancement in the business technology area of the company and getting a degree from UAT.

Big (and oftentimes small) companies generally want to help their people succeed. Know why? Because companies are made up of people. Individuals who also want to see other individuals do better in life. They want to help you succeed.

Numero Dos: This is the kind of perk that inspires loyalty.

Once a company helps you on the path to gain a degree in business technology, a bond forms between you and your company—and this is a good thing. They have helped you accomplish something that otherwise you couldn’t do. And they have gained a valuable, loyal employee with their investment. Mutual respect is formed and you as the employee are less likely to separate.

But Here’s Another Obstacle

That’s all well and good, but my company doesn’t offer tuition reimbursement and may not support the time I need for full-time school. Got any other smart ideas?

Yes, actually. If they don’t offer tuition reimbursement, ask them to.

Companies get up to a $5,250 a year tax write-off per employee for education-related expenses. Now, that much money may not pay for everything, but combine this benefit with your federal student loans and suddenly the possibility of moving from fry cook to CEO doesn’t seem so crazy.

And, maybe you really are working a lot as a fry cook right now and have other commitments keeping you from believing you can actually add in full-time school for the next several years.

UAT’s courses are offered year-round. That’s right – school is not out for summer. And with UAT’s Synchronic Learning–designed for working professionals and fry cooks alike–you can knock out classes when and how it works for you. You can do this live and in-person, virtual-live (streaming), or access recorded classes after your workday is done. UAT also has fully Online, remote instruction classes for the majority of degree programs where you can attend classes asynchronously.

This allows you, future CEO, to also only focus on two classes at a time and graduate sooner. This design also enables you to actually learn and retain what the professors have to teach instead of just getting a grade moving on.

Sounds great, but when I asked my boss about tuition reimbursement, they said no?

Not a problem. You still have one trick up your sleeve: find a new job. 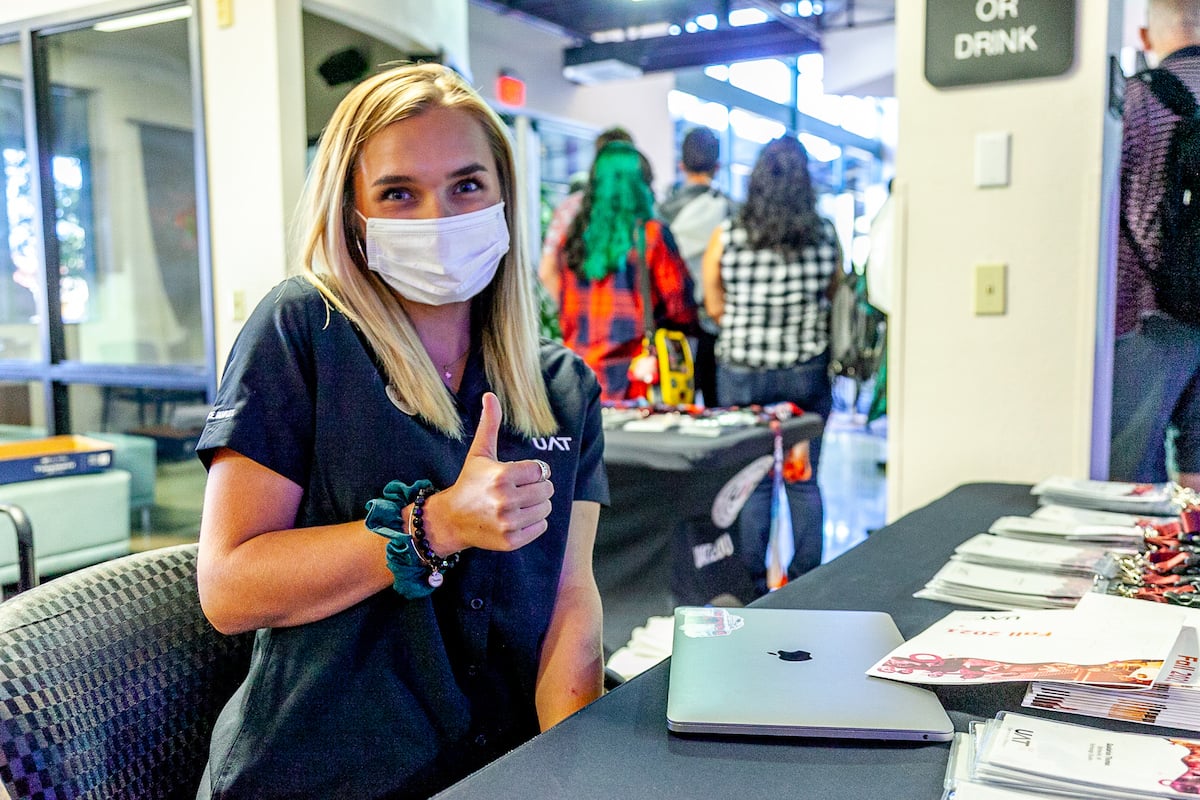 “You Offer What Kind of Perks?”

Much of life is about being strategic and intentional in the things you do. And if we learned anything from the Infinity War, it’s that strategy alone won’t cut it. You have to execute well and not have a Star-Lord in your life who is going to lose his cool after finding out his boo is no más who then wakes up the Mad Titan from Mantis’s empathic voodoo.

Yes, getting a job at Mcdonald's while in college, aside from being easy, is actually a pretty good move. The expectations aren’t unrealistic, you learn to work as a team, and they offer college tuition reimbursement. And depending on your degree plan, like say Business Technology, if you like the corporation, working from minimum wage or entry-level up to CEO is a pretty cool story.

But let’s get strategic. What job do you really want?

Imagine what you are shooting for. What career are you really pursuing? Take a minute. I’ll wait.

Know what it is? Awesome. Now, think about a job you can get while in college that is as close to that job as possible.

Once you’ve landed on an option or two, find that job at a company that offers tuition reimbursement. If you do that, you’re set! You’ll get a chance to see what it’s like to actually have that job and talk to people on a regular basis who actively make their living doing the thing you are hoping to do. Better still, you’ll be at a company that has a vested interest in seeing you get a degree that will allow you to be qualified to fill one of those positions you are shooting for.

Alright. You have your strategy. Now execute. And maybe tell the Star-Lord in your life to make a taco run every time his emotions start to get in the way of saving the universe. You have a plan. You are ready to execute your plan and become the hero. But first, you need some avocados.

Yes, they do taste better. But they are also usually smaller and cost more.

The same can be said for the difference in private vs. public universities. But, hey, sometimes you need a whole bunch of guacamole for less money because you’ve got a party you’re going to right now!

Other times, though, that party is in a week. You’ve got time to pay a little extra for the better avocados because you know who will be at that party. That’s right; you’re headed to a party with a bunch of guacamole snobs and they are expecting the best guacamole ever.

The same goes for your future employers. Yes, they will respect your degree from a public institution, but public institutions often lack the laser focus on particular niches that private universities have, like say on advancing technology, like at UAT.

The reality is that our civilization is increasingly being defined by technology. The simple fact that this article is being written on a laptop and you are reading it from a phone or tablet or your own computer and not stone carving or a sheet of papyrus should be evidence enough. To be competitive in this increasingly technological world, you have to know technology. You need to surround yourself with it and with the people who know all about it. People like the professors at UAT. 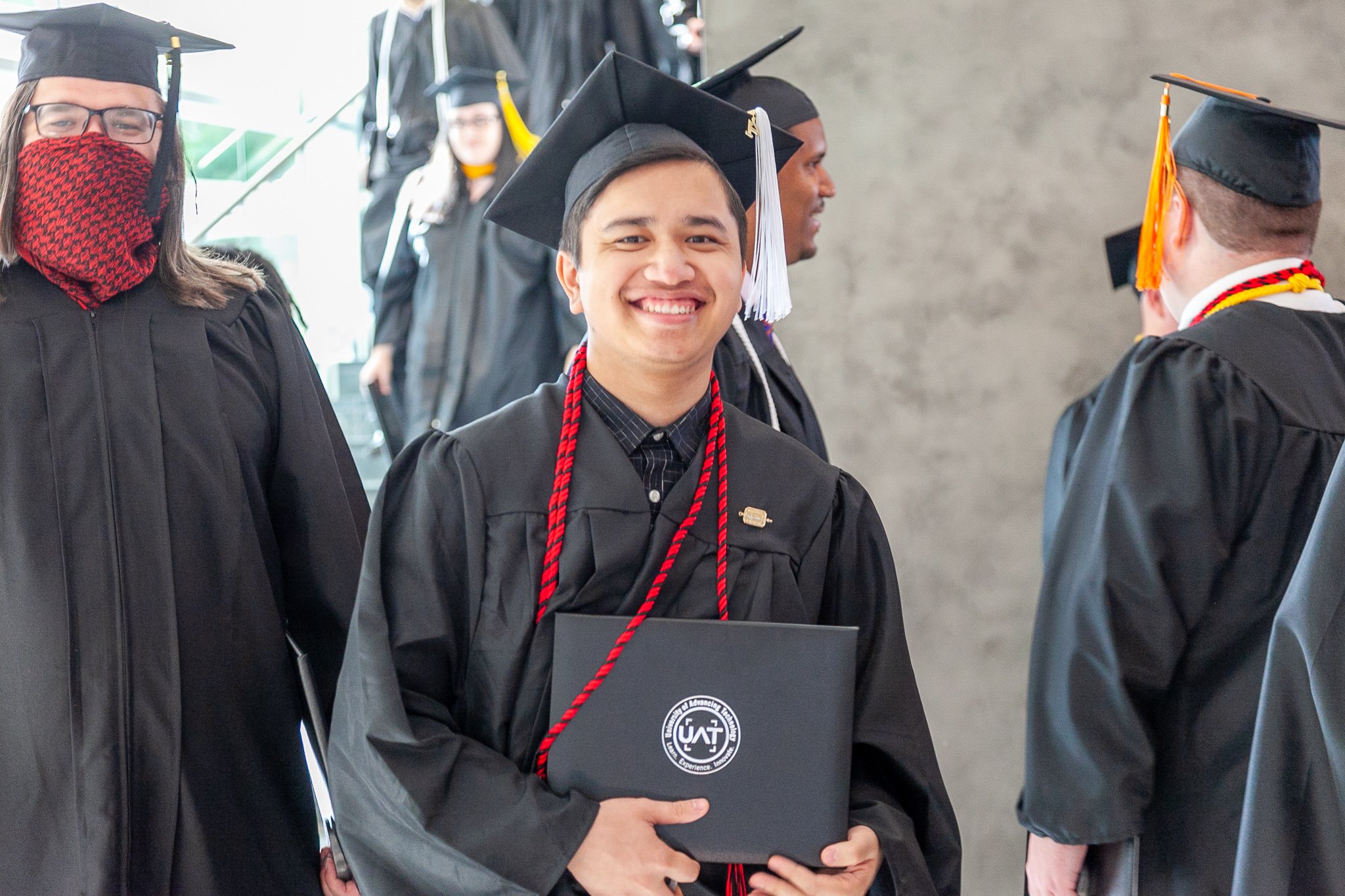 Become Your Own Hero

Alright. You’re now armed with knowledge. Time to do it. Be the hero. Make your plan and save the universe with amazing guacamole. Get a job that will respect you enough to invest in you while you invest in yourself.

Then, do yourself a favor and call the admissions people at UAT and get started asap. With year-round classes, the next start date is around the corner!  Request info or apply now!

Using Credit As a Tool For Your Future Credit is one of the unsung terrors of becoming an adult. It ranks right up there with getting a mortgage and trying to decide whether or not it’s really ...

Financial Aid Resources: All About Scholarships

In addition to financial aid, scholarships are an excellent way for incoming UAT students to fund or partially fund their education. UAT offers various scholarships, and you will learn if you qualify ...

While supporting incoming and current students through the financial aid process including determining their eligibility for Federal Student Aid, our Financial Aid Advisors occasionally encounter ...