Jake Fusco loves storytelling and has always been fascinated by how stories and lessons change as they are passed down. Combined with his interest in technology, this resulted in Jake triple-majoring in Game Design, Game Programming and Business Technology.

Jake chose UAT for the game development programs — he was instantly drawn to Game Design because he believes games are the best suited medium for storytelling and helping people learn. One of Jake’s goals is to teach others how to think in different ways about situations and hopefully change society for the better.

Jake also chose UAT for Synchronic Learning, which has resonated with how he tries to live life. While attending UAT, Jake learned that drive, teamwork and communication are paramount to the success of solving problems. Time and time again, these three qualities helped Jake succeed at work and in his classes.

While attending UAT, Jake has worked on numerous innovative projects along with making many lasting friendships. During his second semester, he joined the production studio class and is still working with the same team on a mobile AR game. Jake is the Geek Rho President, an RA at Founder's Hall and is in the midst of another project with BunchOfNerds, a student-run multi-media production company.

Jake’s hobbies include gaming with friends, being the Dungeon Master for Dungeons and Dragons, cooking and studying philosophy. Down the road, Jake intends to pursue his Master’s degree in Game Production and Management.

Jake draws inspiration from many noteworthy sources — George Lucas for his creative vision, Abraham Lincoln for how to deal with people coming from different worldviews and perceptions and Hirohiko Araki for his philosophy when writing stories.

Get the most out of your education with Synchronic Learning. 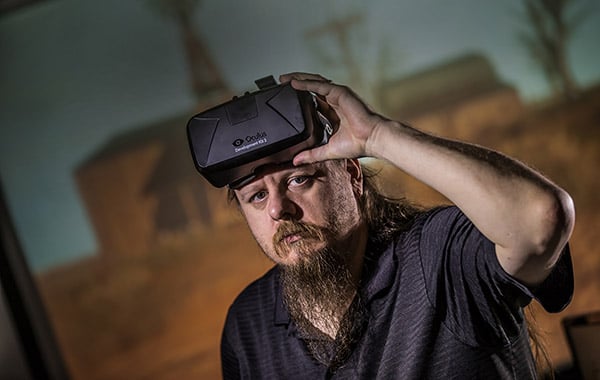