Stripes or solids — show off your trick shot and sink the ball. Take your cue to join fellow UAT students in a pool tournament faceoff. Are you the ace?

Did you know pool and billiards are often used interchangeably, but billiards is generic to any kind of tabletop game played with a cue ball and stick, while pool is more specific to a game with pockets. Some pool games include blackball, one-pocket, eight-ball and bank pool. Which game is your favorite? 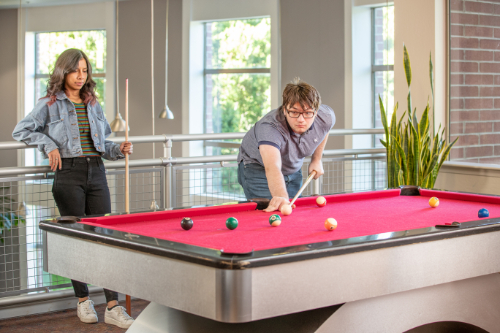 Students serve up their skills in a sudden death ping-pong match. Also known as whiff-whaff and table tennis, ping-pong is highly competitive whether it’s between two or four players.

International Table Tennis Federation (ITTF) is the worldwide organization that governs table tennis, which has been an Olympic sport with several event categories since 1988.

Students take the defense and the offense in a combat of quick wrist flicks to win. Known as foosball in North America, table soccer or table football is a well-loved game for those with and without fancy feet. Just like the real deal, the aim of the game is to shoot the ball into the opponent’s goal by manipulating, and sometimes aggressively spinning (although, official rules prohibit “over 360-degree shots”), the mono-legged players.

While the game was only recently brought to the U.S. in the 1950s, patents for similar table games in Europe date back to as early as the 1890s. The game reached its peak popularity in the 1970s, where it could be found in pool halls and bars throughout the country.

Jump out of your seat and play some table games in Founder’s Hall.

UAT students congregated in the quad to show off their batting skills and release pent up energy with the frustration piñata. Students went up to bat with a sole goal in mind — kill for the candy. ...